Are there any differences between female and male when it comes to life satisfaction? How do you explain this?
The last century has witnessed extraordinary achievements in the status of women. However, despite this progress in a number of countries women are somewhat less satisfied with their lives than 40 years ago, both in absolute terms and relative to men. This may reflect the fact that women now, more than before, find it difficult to balance their family and work obligations. Another possible explanation is that women are now, more likely to compare their own situations to that of men, while in the past they used to compare themselves to other women. It is possible therefore that women are in fact experiencing a higher quality of life today than in the past but that they now have higher aspirations  for what their life should be like and , as a consequence, report lower levels of life satisfaction.

In terms of objective personal well-being, what are the main issues that women face nowadays?
Indicators comparing the objective conditions of women and men in OECD countries  show clear gender inequalities in several dimensions: women are more exposed to domestic violence and abuses (more than 40 of women experience intimate violence by their partner at least once in their life in several countries); they struggle to access male-dominated occupations ( only one out of four business owners with employees is a woman); they are less likely to make it to the top of the career ladder (only 32 of senior managers are women they earn significantly less than men either as salaried employees (16 less) or as entrepreneurs (35 less); and they are more likely to live in poverty at old-age (15 of women and 11 of men over 65 are poor in OECD countries). Moreover, women continue to bear the burden of household chores and of care work, devoting twice as much time to household work than men. Of course, there are important differences across countries. In less developed countries, the main issue for women’s well-being is still the respect of human rights, such as the rights to choose when to get married, to have full legal protection against violence within or outside their home, to hold a property right over the land or save money in a bank account without asking for men’s authorization.

Feeling of security, work-life balance, material well-being, career opportunities… When it comes to the perception of their quality of life, which indicators show some differences between women and male?
Objective indicators of well-being are essential to assess people’s living conditions and quality of life, but information on people’s evaluations and feelings about their own lives is equally important, and may sometimes provide different information. This is the case, for instance, of the feelings of security. Both police records and victimization surveys show that men are at greater risk of being victims of assault and violent crimes. However, women systematically report lower feelings of security than men, due for example to greater fears of sexual attacks. As already mentioned, in terms of work-life balance, women more often than men report that they are not able to fulfill their family duties because of work responsibilities. There is also evidence that women negotiate less for their salaries than men, and have lower expectations regarding promotions. Women are less confident than men about their capabilities to start a successful business, and this partly explains why there are so few women among top entrepreneurs. All these bits of evidence suggest that gender roles and norms still play a big role in determining women’s perceptions of their own capabilities and potentially undermine their achievements and well-being.

What would be your recipe for an improved Quality of life for everyone?
A good life is first and above all a question of freedom of choice as regards to how one wants to live. It is about having the multiple capacities needed to effectively make this choice. Some of these capacities include being healthy, educated, feeling safe, having a political voice, the ability of combine harmoniously work and family life and feeling satisfied with one’s life. Trust in others and co-operation are also important for quality of life.
But we should also consider what will make for a good life for our children and grandchildren. For this, we need to preserve and invest in key assets that underpin well-being opportunities of future generations, such as for instance natural resources but also human and social capital.

The Better Life Initiative is a major effort to provide policy and decision-makers with a broad range of statistics relevant to understand today’s societies and economies. The Better Life Index is an important innovative tool that the OECD launched to respond to the need of developing measures that are directly relevant to people’s well-being.

Discover the testimonials of Sodexo employees, clients and opinions leaders – all women - on what in their experience constitutes Quality of Life. 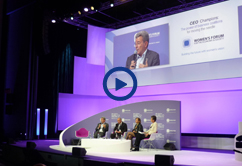 At the 2012 Women's Forum, Michel Landel, Sodexo CEO, presented Sodexo’s strategic priority and challenges to foster the representation, engagement and development of women in leadership and operational positions.

Women represent 54 of Sodexo’s workforce. Convinced of the need to promote their advancement, nurture talent and, more generally, foster diversity, Sodexo has long given high priority to gender equality.