97% of our employees are hired locally in the 80 countries where we operate. By establishing long-term partnerships, Sodexo seeks to play an active role in local community development.

Sodexo began working to fight hunger and malnutrition in 1996, after some of the company's U.S. employees noted that some children lacked the basic nutrition provided by school food services during school holidays. The Sodexo employees decided to step in and provide free meals during those gaps.

Sodexo continues to provide its support by engaging employees, suppliers, clients and consumers in the Stop hunger efforts in some 30 countries through six initiatives. 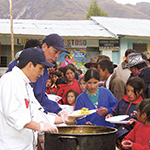 Each year in April and May, Stop hunger Servathon is a key moment for mobilizing all of our volunteers to work with local NGOs to serve free meals, collect food and raise funds. Today, we work with over 600 NGOs in 30 countries. 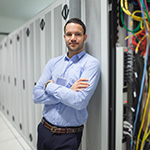 All Sodexo employees have the opportunity to contribute to Stop hunger by donating a small portion of their monthly salary, with an equal amount donated by Sodexo. In the U.S., this operation has raised nearly $700,000. 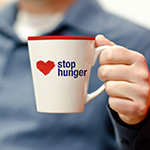 These products are sold to Sodexo consumers around the world, with a portion of the sale going to benefit Stop hunger. This can take the form of special operations with a supplier, creating a product in collaboration with an NGO or sales of Fair Trade products. 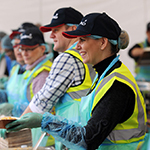 We encourage two forms of volunteering: basic volunteering that requires no special skills other than the heart and the willingness to offer time and empathy to others and a willingness to act for change, and skills-based volunteering for those who perform missions for NGOs who have need of specific skills. Sodexo employees participate voluntarily in these initiatives, and the donations of money or food are collected and earmarked for NGOs or local organizations of their choice. 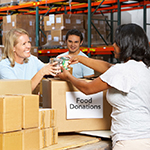 While Sodexo teams make every effort to eliminate food waste at the restaurants they manage, conditions occur that result in too great a quantity of food than can be prepared for consumption that day. In this case, we offer the daily surplus to local associations or NGOs for redistribution to those in need. 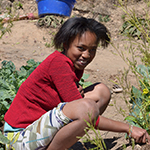 We fund community garden projects run by NGOs around the world that pursue one or both of the following two objectives: provide opportunities for those in need to eat fresh vegetables and fruits that they may not have the opportunity to buy because these products can be among the most expensive in some countries; educate children on the importance of eating fruits and vegetables, and thus change their consumption behavior as well as that of their families.

Sodexo organizes the STOP Hunger Servathon each April, an operation that mobilizes our employees to work in their communities and engage with local partners to help fight hunger and malnutrition. What are their plans this year?